The computer generally takes the data and process the data and give us information. this information is provided to the users with help of output unit of the computer. The output unit consists of devices which are often called as output devices which are capable of converting the machine understandable format to Human understandable format. Let us discuss some of the output devices are their working ....

It is the most commonly used output device. The monitor is a soft copy (means we can modify contents of data and data is temporarily on the screen) output device. A monitor looks like a television and it displays alphanumeric and graphic output. A monitor is also called Visual display unit (VDU)
Types of monitor :

Standard glass-tube televisions and your CRT monitor work quite similarly. A glass cathode-ray tube (1), which contains a vacuum, has three electron guns (2) at its narrow end, each containing an anode and cathode assembly. As you may recall from high-school science, the cathodes emit electrons; the anodes draw the electrons away from the cathodes, focusing and accelerating them into electron beams (3). The deflection yoke (4), around the tube base, precisely manipulates the three beams via electromagnetic force, working with the CRT's circuitry to sweep them across the screen in precise, horizontal lines. Where a beam hits the screen, it causes a red, green, or blue (RGB) phosphor dot (5) to glow; the screen's inner surface is coated with these colored phosphors. (The beams, though colorized in the illustration, are actually invisible.) 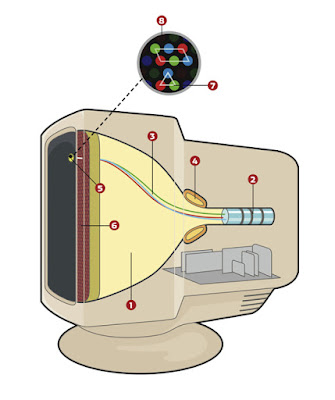 CRTs come in two main varieties: shadow mask and aperture grill. In shadow-mask models, the RGB phosphors on the inside of the screen are arranged as a staggered pattern of dots (see the inset); in the latter, they're not dots but repeating vertical RGB stripes. In a shadow-mask CRT, when the monitor receives commands from your PC's graphics adapter, the electron guns fire their three beams, in concert, through tiny holes in the shadow mask (6), a metal screen just behind the phosphor-coated display glass. (Aperture-grill monitors, popularly known as Trinitrons or Diamondtrons, work similarly, but vertical wires, not a mask, funnel the beams.) Their channeled beams illuminate a trio of phosphor dots (a triad (7)) lining the inside of the glass. A pixel (8)—the smallest image element you can see—comprises one or more triads; how many depends on the resolution you specify. The lower the resolution, the more triads that are assigned to each pixel.
The electron guns blaze across the screen, row by row, illuminating phosphors in their wake. Varying the beams' intensity strengthens or weakens the glow from a given phosphor dot; by careful manipulation of every one, the triads and pixels, seen by the eye as single units, create the illusion of different-color dots.
Phosphors don't glow for long, though. Once the guns have scanned the whole screen, they repeat the process—typically, 60 to 80 times a second. (This number is what is known as the refresh rate.) To comprehend the staggering scale of the task: A CRT running at 1,280x1,024 at a 75Hz refresh rate illuminates and re-illuminates nearly 100 million pixels per second.

A liquid crystal display or LCD draws its definition from its name itself. It is combination of two states of matter, the solid and the liquid. LCD uses a liquid crystal to produce a visible image. Liquid crystal displays are super-thin technology display screen that are generally used in laptop computer screen, TVs, cell phones and portable video games. LCD’s technologies allow displays to be much thinner when compared to cathode ray tube (CRT) technology.
Liquid crystal display is composed of several layers which include two polarized panel filters and electrodes. LCD technology is used for displaying the image in notebook or some other electronic devices like mini computers. Light is projected from a lens on a layer of liquid crystal. This combination of colored light with the grayscale image of the crystal (formed as electric current flows through the crystal) forms the colored image. This image is then displayed on the screen.
An LCD is either made up of an active matrix display grid or a passive display grid. Most of the Smartphone’s with LCD display technology uses active matrix display, but some of the older displays still make use of the passive display grid designs. Most of the electronic devices mainly depend on liquid crystal display technology for their display. The liquid has a unique advantage of having low power consumption than the LED or cathode ray tube. 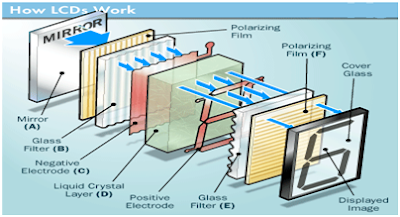 Liquid crystal display screen works on the principle of blocking light rather than emitting light. LCD’s requires back light as they do not emits light by them. We always use devices which are made up of LCD’s displays which are replacing the use of cathode ray tube.  Cathode ray tube draws more power compared to LCD’s and are also heavier and bigger.

The principle behind the LCD’s is that when an electrical current is applied to the liquid crystal molecule, the molecule tends to untwist. This causes the angle of light which is passing through the molecule of the polarized glass and also cause a change in the angle of the top polarizing filter. As a result a little light is allowed to pass the polarized glass through a particular area of the LCD. Thus that particular area will become dark compared to other. The LCD works on the principle of blocking light. While constructing the LCD’s, a reflected mirror is arranged at the back. An electrode plane is made of indium-tin oxide which is kept on top and a polarized glass with a polarizing film is also added on the bottom of the device. The complete region of the LCD has to be enclosed by a common electrode and above it should be the liquid crystal matter.
Next comes to the second piece of glass with an electrode in the form of the rectangle on the bottom and, on top, another polarizing film. It must be considered that both the pieces are kept at right angles. When there is no current, the light passes through the front of the LCD it will be reflected by the mirror and bounced back. As the electrode is connected to a battery the current from it will cause the liquid crystals between the common-plane electrode and the electrode shaped like a rectangle to untwist. Thus the light is blocked from passing through. That particular rectangular area appears blank.
Advantages of an LCD’s:
Disadvantages of an LCD’s:
Applications of Liquid Crystal Display
Liquid crystal technology has major applications in the field of science and engineering as well on electronic devices.

LED display refers to the light emitting elements who is composed by the LED LED (light emitting diodes) array, which is directly used as a pixela to emit red, green, and blue light, thereby forming color images, such as traffic lights, outdoor big screen.
The LED display we are talking here should be precisely called as “LED-backlit LCD monitor”, the principle of which is converting the traditional CCFL into LCD backlight source is into LED (light
emitting diode).

So far, the advantages of LED backlit display is in the theoretical stage, the display is not as good as what the display maket advocated . The main advantages are: energy saving, ultra-thin, light leakage control is better.

OLED (Organic Light-Emitting Diode), literal translation is “organic light emitting diode” or “organic light emitting display.” Monochrome, multicolor, color OLED device has reached the level of mass production, large-size, full-color device is still in development stage. OLED emits light with the help of current driving the organic thin film, OLED can be thinner, the thinnest panel is only 0.1 millimeters, and the use of different material can be made into any curved shape.

Plasma display is also a flat display screen, but unlike LCD, LED, plasma screens emit light byitself, rather than relying on a backlight. 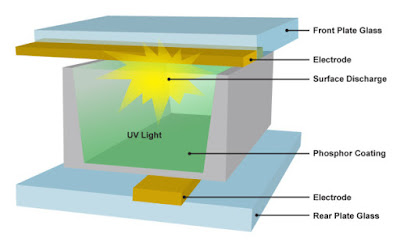 The principle is that the mercury vapor or the inert gas is inserted into the vacuum glass tube, after which voltage is applied to, making the gas generating the effect of plasma and emiting ultraviolet light, exciting the phosphor to generate visible light ,taking advantage of how long the light excited is to generate different brightness. The display, each pixel is generated by three different colors (RGB) light emitting plasma body. Since each pixel has its own separate light, it is particularly vivid.
Because of its technical characteristics, the plasma display can be much  brighter and can display more colors, Plasma Display with no viewing angle and competitive contrast ratio can create a large area of screen, particularly suited for watching movies. However, plasma screens have image blur when playing a still figure for a long time, brightness will be recessed, but the plasma display generate large amount of heat.

FIT
By M Vishnuvardhan Reddy at 09:11