Ubuntu for Android, currently under development, is a free and open source variant of Ubuntu designed to run on Android phones. It enables us to run the Ubuntu operating systems on the android devices. No our android phones (multi-core) can be Desktops. It enables high-end android mobiles to run Ubuntu desktop operating system. So users get the Android they know on the move, but when they connect their phone to a monitor, mouse and keyboard, it becomes a PC

Ubuntu for Android requires minimal custom hardware enablement, allowing fast and cost-efficient core integration. It requires a core based on Android 2.3 (Gingerbread) or any subsequent version.

Ubuntu and Android share the same kernel. When docked, the Ubuntu OS boots and runs concurrently with Android. This allows both mobile and desktop functionality to co-exist in different runtimes.

Shared services and applications are delivered using a Convergence API module which ensures the tight integration between desktop and mobile environments. Work is balanced across the cores of the phone. When the handset is not docked, both CPU cores transfer their full power to Android. 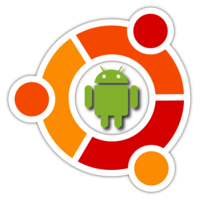