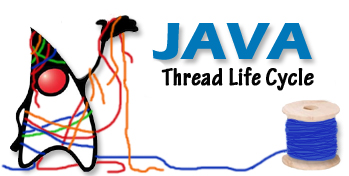 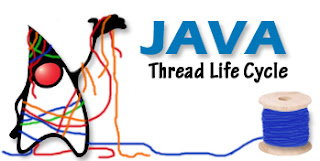 The java.lang.Thread class contains a static State enum – which defines its potential states. During any given point of time, the thread can only be in one of these states: 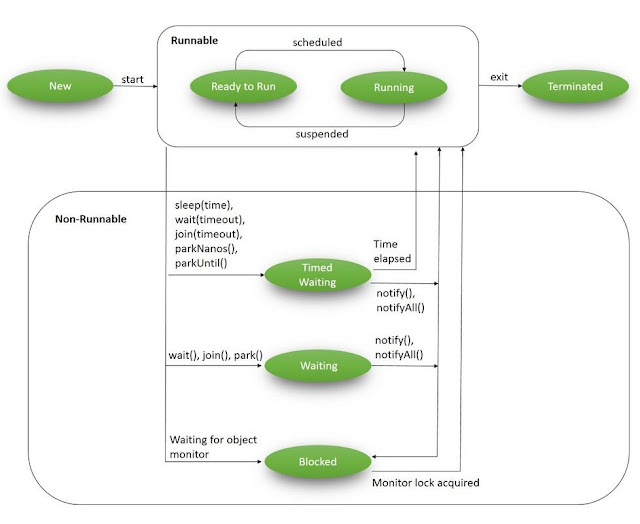 All these states are covered in the diagram above; let’s now discuss each of these in detail.
New
A NEW Thread (or a Born Thread) is a thread that’s been created but not yet started. It remains in this state until we start it using the start() method.
The following code snippet shows a newly created thread that’s in the NEW state:
Since we’ve not started the mentioned thread, the method t.getState() prints:

When we’ve created a new thread and called the start() method on that, it’s moved from NEW to RUNNABLE state. Threads in this state are either running or ready to run, but they’re waiting for resource allocation from the system.
In a multi-threaded environment, the Thread-Scheduler (which is part of JVM) allocates a fixed amount of time to each thread. So it runs for a particular amount of time, then relinquishes the control to other RUNNABLE threads.
For example, let’s add t.start() method to our previous code and try to access its current state:
This code is most likely to return the output as:
Note that in this example, it’s not always guaranteed that by the time our control reaches t.getState(), it will be still in the RUNNABLE state.
It may happen that it was immediately scheduled by the Thread-Scheduler and may finish execution. In such cases, we may get a different output.

A thread is in the BLOCKED state when it’s currently not eligible to run. It enters this state when it is waiting for a monitor lock and is trying to access a section of code that is locked by some other thread.
Let’s try to reproduce this state:
In this code:
Being in this state, we call t2.getState() and get the output as:

A thread is in WAITING state when it’s waiting for some other thread to perform a particular action. According to JavaDocs, any thread can enter this state by calling any one of following three methods:
Note that in wait() and join() – we do not define any timeout period as that scenario is covered in the next section.
We have a separate tutorial that discusses in detail the use of wait(), notify() and notifyAll().
For now, let’s try to reproduce this state:
Let’s discuss what we’re doing here:
The output here is, as you’d expect:

A thread is in TIMED_WAITING state when it’s waiting for another thread to perform a particular action within a stipulated amount of time.
According to JavaDocs, there are five ways to put a thread on TIMED_WAITING state:
To read more about the differences between wait() and sleep() in Java, have a look at this dedicated article here.
For now, let’s try to quickly reproduce this state:
Here, we’ve created and started a thread t1 which is entered into the sleep state with a timeout period of 5 seconds; the output will be:

This is the state of a dead thread. It’s in the TERMINATED state when it has either finished execution or was terminated abnormally.
We have a dedicated article that discusses different ways of stopping the thread.
Let’s try to achieve this state in the following example:
Here, while we’ve started thread t1, the very next statement Thread.sleep(1000) gives enough time for t1 to complete and so this program gives us the output as:
Tags # Java
Share This

Java
By M Vishnuvardhan Reddy at 22:30