M Vishnuvardhan Reddy 15:23 Networks,
Share This
Bluetooth
Bluetooth is a wireless standard for exchanging the data over short distances using short wave length radio waves (i.e., 2400and 2480 MHz). It is the one of the most often talked about wireless standards beside Wi-Fi. It was developed by a telecom company named Ericsson. A network of devices communicating via Blue tooth is called as Personal Area Network (PAN).
E.g.: Common use of Bluetooth is seen in mobile phones, Bluetooth Headsets/ Hands free, Bluetooth wireless Keyboard/ Mouse, Bluetooth printers etc., 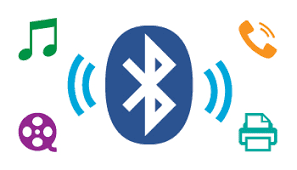 Although Bluetooth and Wi-Fi are used to design wireless networks they have the following differences
»      Distance:Bluetooth is lower powered, which means that its signal can go only short distances up to 10 meters only. Wi-Fi can cover your home. Some Bluetooth devices operate under a high-powered scheme, which can reach up to 100 meters.
»      Speed:The fastest existing Bluetooth implementations have a maximum data rate of 3 Mbps. But Wi-Fi have a maximum data rate of 300 Mbps. Wi-Fi can handle high-speed transfers of the biggest files but whereas Bluetooth as something designed for lower speed connections. The current 3.0 version of allows data transfer speeds of up to 24 Mbps. It does this by using a Wi-Fi radio built into a Bluetooth 3.0 device, so the Bluetooth radio controls the transfer of the data, but the actual transfer occurs over Wi-Fi radio.
»      Application:Bluetooth is designed as a replacement for cables i.e., to get rid of tangle of cables that link your mouse, printer, monitor, scanner, and other devices. In fact, the first Bluetooth device was a Bluetooth headset, which eliminated that annoying cable to the telephone.
Communicating with Bluetooth devices:
Bluetooth device automatically and spontaneously forms informal WPANs, called Piconets, with one to seven other Bluetooth devices that have the same Bluetooth profile.
A particular Bluetooth device can be a member of any number of piconets at any moment in time each piconet has one master, the device that first initiates the connection. Other participants in a piconet are slaves.
The three types of Bluetooth connections are
»      Data only:When communicating data, a master can manage connections with as many as seven slaves.
»      Voice only: When the Bluetooth piconet is used for voice communication (for example, a wireless phone connection), the master can handle no more than three slaves.
»      Data and voice: A piconet transmitting both data and voice can exist between only two Bluetooth devices at a time.
Each Bluetooth device can join more than one piconet at a time. A group of more than one piconet with one or more devices in common is a scatternet
Tags # Networks
Share This

Networks
By M Vishnuvardhan Reddy at 15:23