M Vishnuvardhan Reddy 01:00 Networks,
Share This
OSI Referential Model
Computer networking theory with Open Systems Interconnection Reference Model
Understanding the theory behind networking is really just as important as its actual practical implementation itself. Think of it this way, if you can’t read music, you can’t play a piano! In this section we are going to discuss the OSI (Open Systems Interconnection) Reference Model, and soon you will find out why it contains crucial information about how networks communicate. The OSI Reference Model gives us a theoretical way of describing the process of communication in networks in a step by step process. It was first proposed as a standard reference by the ISO (International Organization for Standardization), and was drafted as a standard in 1983. It is the most idolized guide to understanding networking concepts today, more than any model brought before it.
The OSI model breaks up the process of network communications into 7 layers that consist of various protocols and different technologies that work in tandem from one layer to the next in order to process, and transfer data among computer networks that traverse the internet.
7 Layers of the OSI Model 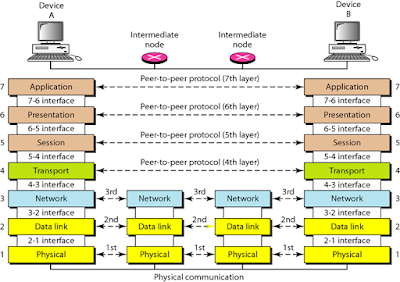 7: Application Layer
6: Presentation Layer
5: Session Layer
4: Transport Layer
3: Network Layer
2: Data Link Layer
1: Physical Layer
The whole process of network communication consists of various combinations of different protocols and technologies that work together to make networks function, such as TCP/IP (Transmissions Control Protocol/Internet Protocol), network interface cards, and networking media, such as cabling, adapters, and encoding of data for transport. The OSI Model explains the process of how data is converted, encapsulated, transmitted across networks, and decapsulated for processing at the receiving end of a communications media. As data is packaged for delivery across a network media, Information passes from layer to layer in the form of a “Protocol Data Unit” (PDU), in which each layer ads (encapsulates) information in the PDU in the form of headers and footers with the main data or “payload” being encapsulated between these headers and footers (for instance a Microsoft Word document).
Likewise, data is decapsulated at the receiving end of communications after passing across network media and reaching a network interface card. As the PDU travels from layer to layer, say the Application layer (layer 7) down to the Physical layer (layer 1), each layer ads its own header and footer information. This process is reversed on the receiving end, and data is decapsulated as it is passed back up thru each layer starting with layer 1 (the physical layer) on the receiving machine, eventually stripping the data of all of its attached header, trailer, and embedded networking information, and providing raw data for conversion and presentation at the application layer. Each Layer works in tandem with the layer above, and the layer below it to process and transmit data among networks.
Starting with layer 7, the Application Layer provides network access interfaces for email, web, and browser based applications to access network services. In some cases it also provides for error recovery for certain types of applications. HTTP is an Application layer protocol, and the file and printer sharing function of Microsoft based operating systems also work at this level. It also tends to be the first point of network access when GUI’s (Graphical User Interfaces) are used to access network services, such as your browser, or say Remote Desktop Services in Windows based PC’s. HTTP (Hyper Text Transport Protocol) is the protocol we use to connect to websites over the internet.
Layer 6 is the Presentation layer. It provides the formatting functions for data in network communications, such as specifying whether data in a file is encoded as ANSI or UNICODE. It also provides the data formatting for graphics, multi-media, html, and general data files. The presentation layer is responsible for communicating to the application layer how to display, encode, or decode certain files for presentation (say an HTML web page in a browser window.) The protocol data unit at this layer is simply data.
Layer 5: The Session layer is responsible for initiating and managing network connections. It handles the general setup of “sessions”, the exchange of data, and the tear down of sessions upon network communications. Many network security protocols function at this level, SSL being one of those. Login functions for websites, FTP, as well as web and server login interfaces largely work at this layer. It also provides synchronization services, and acts to manage data transmission like a traffic cop, such as determining when each node (computer) can transmit data, when, and for how long. “Keep alive” messages function at this level to maintain idle network connections that may be, or may not be transmitting data, in order to keep network sessions from ending. As well, it manages check points in data transmission so that if a connection is lost or interrupted, only data from the last successful transmission of a PDU needs to be retransmitted, effectively resuming data transfer where it left off (such as with downloading a file from a website within your browser, pausing that download, and resuming it at a later time). The Protocol data unit at this layer is simply data. 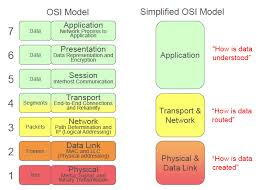 Networks
By M Vishnuvardhan Reddy at 01:00